THE FOUNDING OF THE

At the August 1930 American Numismatic Association Convention in Buffalo, William J. Schultz, Cincinnati numismatist, armed with telegrams from Cincinnati hotels, Mayor Russell Wilson, and many others, invited the ANA to have its 1931 Convention in Cincinnati. Harley Freeman of the Western Reserve Numismatic Club, Cleveland, seconded Cincinnati for the 1931 convention after Toronto and New Orleans were mentioned as possible 1931 hosts. Sam Kalealo, member of the only other Ohio coin club, Youngstown Numismatic Club, also invited the ANA to Cincinnati for 1931. Dr. J. M. Henderson, noted Columbus numismatist, also voiced support for a Cincinnati ANA Convention in 1931. So it was moved, seconded, and unanimously carried that Cincinnati be the next ANA convention site. The Board of Governors agreed.

The Cincinnati Numismatic Association, with a membership of 15 actual coin collectors, was brought into being within one week after the Buffalo convention. Temporary officers named were Herbert A. Brand, Chairman; G. L. Schultz, Secretary; and William J. Schultz, Publicity Chairman. These were the officers until the first election in January 1931. The Constitution and By-Laws, after a second reading, were adopted October 28, 1930.

With this great group of the numismatic elite solidly behind him, Schultz and his friends appeared at the Buffalo ANA Convention in 1930 and overlooked no opportunity to win over every important person attending. He brashly requested the 1931 ANA Convention for Cincinnati, to enable him to form a new ANA Club and got it.

This was an unbelievable accomplishment of dedication and determination. Especially so since the East, in 1930, still though the civilized U.S. ended at Jersey City and Cincinnati was still Daniel Boone and Indian country.

The following is quoted verbatim from an editorial in the 1931 The Numismatist:

“Those who have carefully read these articles of the 1931 Convention City are probably convinced by this time that Schultz knows his Cincinnati. He has figuratively taken prospective conventioneers on a tour of the big city on the Ohio.

When Mr. Schultz appeared at the Buffalo Convention last year and told the members that Cincinnati wanted the 1931 Convention, and that it would mean the formation of a local club if the Convention would meet there, the Buffalo gathering felt inclined to grant his request without argument. He went home and in a few weeks, the Cincinnati Numismatic Association was formed . . .”

(How could he miss with Bauer, Zerbe, et al on his side?)

“Besides being an attorney . . . during the last nine months his time has largely been devoted to making arrangements for the ANA Convention . . . Although Buffalo was the first convention he attended, and he was a stranger to most on the first day, by the time the convention was adjourned he knew everybody and everybody knew him. Big and jolly, he has a personality all his own and does things when others are thinking about them. With Schultz in charge of the entertainment, those who attend the convention are assured of six days of the best vacation they ever experienced . . .”

Now having obtained his ANA Convention, Schultz really went to work to make it the best since the ANA was founded. He asked for, and was granted, the use of the June-July-August “The Numismatist” for his Cincinnati buildup. He started his story with Longfellow’s poem in the June issue:

“The Queen City of the West

In her garlands dressed

On the banks of the beautiful river.”

In his three monthly articles, Schultz dramatically pictured every notable and important item of interest of Cincinnati’s glorious past and present that might be of interest to a visitor, in order to entice every ANA member to attend the convention in 1931.

No form of innovation was overlooked by Schultz and his group to entertain their visitors.

At the December 8, 1930, meeting of the CNA, a committee was named by Herbert Brand composed of William L. Doepke, William J. Schultz, and Walter J. Boebinger to create a design emblematic of Cincinnati for the CNA token, which was planned to be distributed to the visiting delegates as a memento. These tokens were to be struck in silver for founding members and gold for life members.

The design created by the committee and adopted by the CNA was characteristic of Cincinnati. The center of the design has the well known Tyler-Davidson Fountain, which stands in the center of the city. Surrounding this is “Cincinnati Numismatic Assn. 1930.” This design has been reproduced on the letterhead of the CNA every year since.

The obverse of the token or medals had this design and the reverse had “One Itannicnic” (Cincinnati spelled backward) with two palm branches and space for engraving name and number. Five pure gold, twenty-five pure silver, and three hundred copper pieces were struck. The gold medals were for life members and cost $100, the silver were for the founders and cost $10, and the copper were for members at $1. The dies were made and the medals struck by the Gregg Wright & Sons Company from metal furnished by CNA member and owner of Cincinnati Gold and Silver Refining Company, William H. Schwarz.

The 1931 Convention Committees were:

The, for then, lavish entertainment and civic cooperation in the setting of the most beautiful hotel on the continent, the almost new Netherland Plaza, pleased the numismatic fraternity greatly and they all left agreeing that Schultz had fully kept his promise of one of the finest vacation weeks of their lives in the beautiful Queen City.

An interested gentleman of the city attending the convention was Sol Kaplan, already a veteran of 17 years in the stock brokerage business (he started at the age of 13!) Since many of these wealthy members were clients, any of their activities in the field of money interested him, and he sensed that this might be an even more lucrative field for his talents. It was not too long before he became involved enough to become Cincinnati’s first full time coin dealer and during the following era he attained his major stature in numismatics.

The ANA convention was a success as on the last day, September 3, 1931, resolutions were made, seconded and passed giving a hearty vote of thanks to Schultz, all of his chairmen, committees, Rembold, Doepke, the Netherland Plaza Hotel, City of Cincinnati, and the Cincinnati press. There were 81 registered at the convention.

The culmination of the 1931 ANA Convention, which was a great success for both the ANA and the host club, set the numismatic tide in Cincinnati surging and leading to the great era which Jule Silverman termed the “Golden Age of the Morganatic Angels.”

Despite the dark days of 1931 and 1932 with banks closing doors even faster than businesses were failing nationally, conservative Cincinnati weathered the storm nicely. The exposure to numismatics enticed wealthy collectors of stamps, guns, and other items to this new exciting field of coins, currency and medals.

Schultz and his founding group, having an acquaintanceship with the bankers, financiers, and businessmen, easily attracted them as new members to the club, and with the avidity of a child with a new toy, and they soon became the leaders, guides, and the “angels.” Angels were as always, of utmost importance to a club. It was not unusual for an H. Gibbs of Pittsburgh to invite the entire club to his baronial estate for a meeting, or for F. C. C. Boyd of New York to foot the bill for refreshments for all who attended his club meetings. 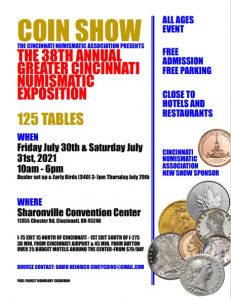 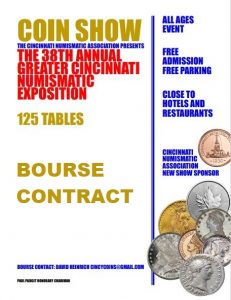 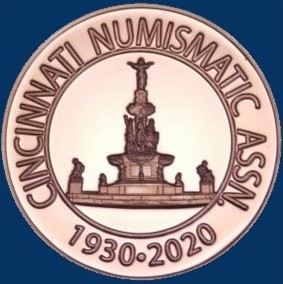 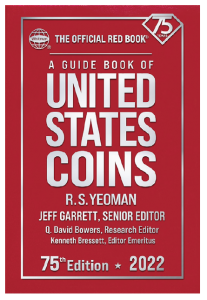 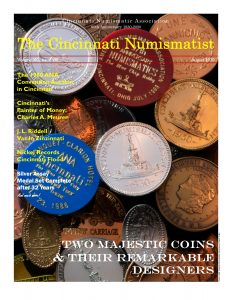